–Lupa explaining the way that Camp Jupiter is run

Camp Jupiter is a camp designated to protect and train the children of the Roman gods and their legacies. Its entrance is a service tunnel neat the main Caldecott Tunnel in San Francisco. The current Praetors are Percy Jackson, Reyna Ramirez-Arellano, and Frank Zhang. 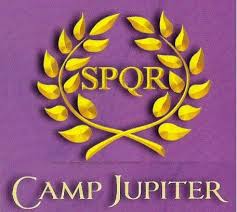 Camp Jupiter began long ago during the ancient times after the fall of Troy, Aeneas the demigod, son of Venus led the Trojans into exile in Italy founding a new civilization which eventually became Rome. Their culture became more disciplined, militaristic, and warlike which the gods eventually adopted; producing demigods different from those conceived by their Greek aspects. A rivalry developed between Greek and Roman demigods which subsequently lead to many conflicts over the millennia. The last of these wars mirrored the mortal's civil war of the 1860s. Because of the tremendous death toll, the gods decided to completely separate their children to avoid further bloodshed by weaving the Mist so thickly that the two rival groups forgot each other and would ensure that it would remain so ever since.

Another story of the founding of Rome is the story of Romulus and Remus. They were the sons of Rhea Silva, and they were wanted to be dead under the decree of the king. Rhea put the two boys in a river, the Tiber River, and they floated down to the lair of Lupa the wolf. This is very similar to the story of Moses. The two were trained by Lupa and became very great warriors. It is also to be remembered that they were the sons of Mars.

They decided to find a new place, safe from the horrid king. This would later be called Rome, named after Romulus. In a fight about the setting of borders, Remus was killed by Romulus in anger.

Chiron, Lupa, and most likely others who also knew of this swore upon the River Styx never to speak of it. Even after Hera/Juno had violated the agreement by revealing Jason Grace to the Greeks and Percy Jackson to the Romans, Chiron wanted to keep this promise. He broke it, only when he was forced to tell the story to the campers during a War Council meeting.

According to Jason, the campers are more disciplined, formal, and warlike like their gods. Lupa is a harsh trainer who respects only the strong. In addition, campers are not only comprised of demigods but also legacies

Percy Jackson and the OlympiansEdit

Although the camp's existence wasn't known of until The Lost Hero, while the Greek campers fought off the invasion in Manhattan, the Roman campers assaulted and conquered Mount Othrys. According to Jason Grace's memories, they scaled the mountain and battled "hordes of snake monsters." Jason personally defeated the Titan Krios and toppled Kronos' black throne. The Greeks were told that the palace on Mount Othrys crumbled after the attack on Olympus failed, as the palace was destroyed as a result of Kronos' destruction. In actuallity, however, the Roman legion destroyed it and thought that Kronos had vanished after they destroyed his throne and his main base on Mount Othrys.

Camp Half-Blood rediscovers its existence after Chiron vaguely tells them of the Greeks and Romans' separation after a war went on between the two groups, which mirrored the mortals'[2]American Civil War in 1861-1865. Percy and Jason, the Greek and Roman camps' recognized leaders have switched places due to Hera. The camp was said to be harsher than Camp Half-Blood and that the weak do not survive. All Roman campers wear plain purple t-shirts and can earn a similar tattoo to that of Jason Grace, a series of lines like a bar code to signify how many years they were at the camp, with the initials SPQR (Senatus Populusque Romanus - The Senate and the People of Rome) and the symbol of their godly parent on top.

When Percy first comes to Camp Jupiter he defeats the Gorgons and met the demigods Reyna, Hazel, and Frank. After Percy, Hazel, and Frank finish their quest, they find out that Camp Jupiter is under siege by Polybotes, son of Gaea and bane of Neptune. They hurry back to camp on Arion and engage the monsters, ultimately helping the Romans win the battle (Percy defeating Polybotes with the help of Terminus). The other campers lift Percy into the air and vote for him as their new praetor to replace the missing Jason Grace . When Percy gets a video message that Camp Half-Blood is arriving in a few hours in a war ship (in peace), the legion is told to stand ready in the event of aggression by the Greek campers. Octavian strictly disapproves of this but the due to Percy's utter confidence and Reyna's approval, the camp lets the Argo II come in peace.

The Argo II stops at Camp Jupiter to pick up Percy, Hazel, and Frank. There, the seven and the Romans have dinner where they talk about the prophecy and the seven of the prophecy. Now that Jason is back however, Octavian mentions that there are now three Praetors instead of the limited two. Percy says that they will discuss this problem later and if he needs to, he will stand down and allow Jason to have the title. Percy also mentions that for the time being, they both outrank him and order him to be quiet. Octavian on the other hand is furious that Percy takes the title so lightly and at Percy's attitude toward him.

During the meal, Ella mentions an entire prophecy when she sees Annabeth, a child of the wisdom goddess. Annabeth quickly makes Octavian doubt it is a real prophecy after seeing Percy's panicked face and soon the whole camp believes it was something she read from a library book or something. After lunch, Reyna and Annabeth Chase have a talk together while in New Rome, where Reyna explained the difference between the Roman and Greek gods, as well as the two's hatred for each other. Leo is soon after possessed by an ediolion, thus, the Romans begin to attack the seven, as they hastily go aboard the Argo II.

After the Argo II leaves the camp, Octavian whipped in cohorts into a battle frenzy. He lead the camp on a war march against the seven, chasing them across the country before losing them in the Mediterranean Sea still wanting blood, Octavian turns Camp Jupiter's attention toward Camp Half-Blood, setting up a forward base and planning possible invasion routes.

Jason Grace gives up his praetorship and promotes Frank Zhang to Praetor while they are in Italy. 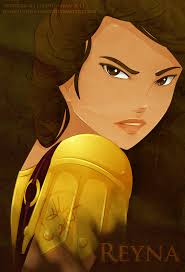 The praetors are the two elected leaders of Camp Jupiter. There can only be a maximum of two at all times, although that rule has been broken twice now.

Like the cabins of Camp Half-Blood, cohorts are where the campers are divided and placed in. There are five cohorts. Each cohort has 4 barracks of 10 bunks. The first and second cohort are the most esteemed while the fifth is considered to be the least honored. Campers traditionally receive their place in the cohorts through family reference letters but also can be given acceptance by a centurion's personal recommendation.

Called the pride of Camp Jupiter, the First Cohort takes campers with the best reference letters.

Like the First Cohort, the Second Cohort take campers with the best recommendation letters though it may not be as esteemed as the first.

Little is known about the Third Cohort except that it is a moderately good cohort.

Little is known about the Fourth Cohort except that its a step up from the Fifth. Their animal is the wolf. 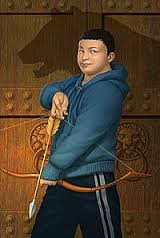 Centurions, like the Head Counselors at Camp Half Blood, are the leaders of the cohorts. They serve as the Senators at the Senate House. Each Cohort has two Centurions.

Ten Senators are elected yearly. To qualify you must be at camp for 5 years. Senators go to discuss problems that arise. They include the Centurions of the Camp, along with the Praetors. The only known Senator that wasn't a Centurion or a Praetor in the books was Nico di Angelo, who served as Pluto's ambassador.

Although an official name for these demigods has not been found, the legionnaires are those who have passed Probatio and are now official members of Fulminata.

Field of Mars Where the campers have their war games, marching drills, and the occasional monster hunting. Every war game the legionnaires build a new fort so that they never have the same challenge twice. The field has many trenches and hidden tunnels.Edit

Where retired Roman legionnaires can live, go to college, get married, and start a life. There are many different shops there, and a busting nightlife. The Forum, Coliseum, Senete House, and Circus Maximus are located in New Rome. At the south end of New Rome lies "The Lake", which is connected to "Little Tiber".

Temple Hill is where all the temples to the Roman gods are located. The most important temples are Bellona's temple, Mars Ultor's temple, and the Temple of Jupiter Optimus Maximus.

It is a garden which is located on the top of a hill in New Rome. It may or may not be dedicated to Bacchus. The garden also happens to be Reyna's favorite spot.

Retrieved from "https://camp-jupiter-and-halfblood.fandom.com/wiki/Camp_Jupiter?oldid=4600"
Community content is available under CC-BY-SA unless otherwise noted.